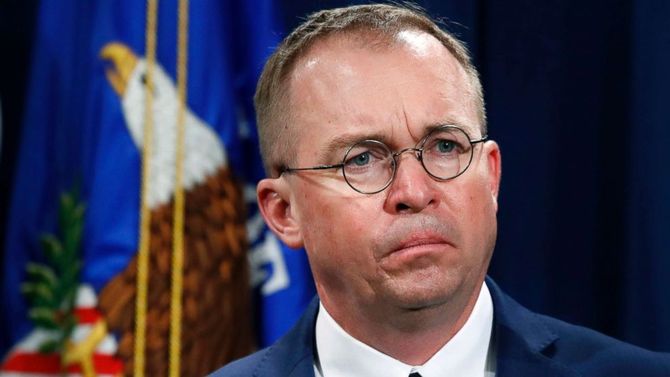 Acting White House Chief of Staff Mick Mulvaney said that no politician, including President Donald Trump, was to blame for shootings like those in El Paso, Texas, and Dayton, Ohio, which left at least 29 people dead this weekend.

As Democratic presidential candidates point the finger at the president's divisive rhetoric, Mulvaney said on ABC's "This Week" that the suspect who allegedly killed 20 people at a Walmart in El Paso, Texas, appeared to have been motivated by beliefs he harbored before Trump became president.

"This was a sick person, the person in Dayton was a sick person," Mulvaney told ABC News Chief White House Correspondent Jonathan Karl, during an interview Sunday. "No politician is to blame for that. The person who was responsible here are the people who pulled the trigger. We need to figure out how to kind of create less of those kinds of people as a society and not trying to figure out who gets blamed going into the next election."

Julian Castro says the shooter is "responsible directly for that shooting in El Paso," but adds that President Trump "as our national leader," has "a role to play in either fanning the flames of division or trying to bring Americans ... together" https://t.co/dXJdrsFMAg pic.twitter.com/QwZW5kn1ND

Several of those killed in El Paso, which borders Mexico, were Mexican citizens, and officials said that they are examining what they called a "manifesto" that they believe was written by the shooter and shows a possible "nexus" to a hate crime. After he was arrested, the suspect told investigators he wanted to shoot as many Mexicans as possible, two law enforcement officials told ABC News. 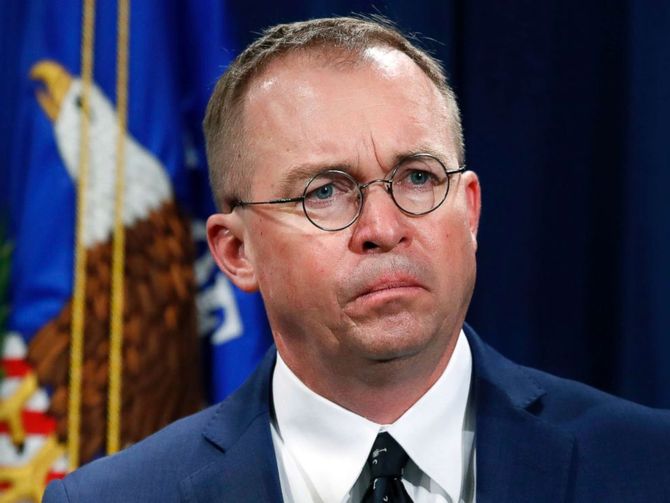 Jacquelyn Martin/AP, FILE Mick Mulvaney, acting director of the Consumer Financial Protection Bureau (CFPB), and Director of the Office of Management, listens during a news conference at the Department of Justice in Washington, July 11, 2018.

Pressed by Karl on whether Trump was at all to blame for using words like "invasion" to talk about illegal immigration and saying congresswomen of color should leave the country, Mulvaney said Trump was just as saddened and angered by the shootings as others.

"There's no benefit here to trying to make this a political issue," said Mulvaney. "This is a social issue."

He labeled the gunmen in El Paso and Dayton "crazy people" who "should not be able to get guns." The Dayton gunman, who died at the scene, killed at least nine people, authorities said. Dozens of people were injured in each attack.

"Sick people who are intent on doing things like this should not be able to buy guns legally," Mulvaney said.

Rep. Veronica Escobar, whose congressional district includes El Paso, said Saturday night that while investigators must complete an investigation, the El Paso suspect's so-called "manifesto" suggested the shooting could have been an act of "domestic terrorism."

Rep. Veronica Escobar says a 2-year-old who survived the mass shooting at a Walmart in El Paso is “recovering from broken bones” after his 25-year-old mother "who was shot multiple times and killed – used her body to shield him and save his life.” https://t.co/MbnF4BZ5XD pic.twitter.com/2tH8FQPuG7

"Today’s shooting in El Paso, Texas, was not only tragic, it was an act of cowardice," President Donald Trump tweeted overnight. "I know that I stand with everyone in this Country to condemn today’s hateful act. There are no reasons or excuses that will ever justify killing innocent people."

In March, asked by ABC News' Senior National Correspondent Terry Moran asked the president in the Oval Office if he thought white nationalism was a rising threat around the world.

Trump replied, "I don't really. I think it's a small group of people that have a very, very serious problem."

"I don’t believe he’s downplaying it. … Look, this is not the same as international, sort of, nuclear weapons," Mulvaney said. "This is a serious problem, there's no question about it. But they are sick, sick people. And the president knows that. Again, Jon, I don't think it's fair to try and lay this at the feet of the president."

"I don't think it's at all fair to sit here and say that he doesn't think that white nationalism is bad for the nation," Mulvaney added. "These are sick people. You cannot be a white supremacist and be normal in the head."

Later on "This Week," Julian Castro, a former secretary of housing and urban development who is running for the Democratic nomination for president, said said the shooter in El Paso bore responsibility, but added, "most presidents have chosen to try to bring people together."

"Anybody who has the ability to see and hear and understand what the president has been doing since he started his campaign in 2015 knows that division and bigotry and fanning the flames of hate has been his political strategy," Castro said. "He's given license for this toxic brew of white supremacy to fester more and more in this country. And we're seeing the results of that."